How to be Comfortable Sitting on The Ground. Step 1 – Lengthen Those Tight Hamstrings. [ATM @ Alta (the bistro in Whistler)]

How to be Comfortable Sitting on The Ground. Step 1 – Lengthen Those Tight Hamstrings. [ATM @ Alta (the bistro in Whistler)]

Click here to re-tweet “How to be Comfortable Sitting on The Ground. Step 1 – Lengthen Those Tight Hamstrings.”

This morning I taught a Feldenkrais Movement Class (aka: “ATM”, or Awareness Through Movement) at a local bistro, Alta Bistro. 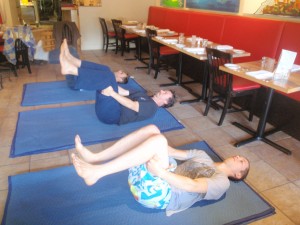 One of the managers loves ATM, and he really wanted to offer its benefits to his staff.

[See, this work isn’t just for the ladies!] 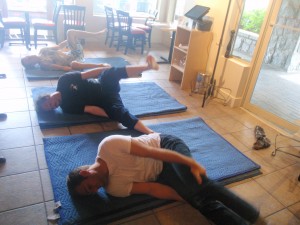 Teaching at Alta is probably one of the few times I teach when it has been “men only”. One of the cool things about teaching to “just men” is that usually they have specific movement commonalities, or for lack of a better term, movement “restrictions”.  Therefore it gives me the opportunity to really target specific areas of the body, as well as movement patterns that may be “stuck”.

The last two weeks we focused on how to better find length in the hamstring muscles.

The group of muscles called “the hamstrings” run from the pelvis, namely the sits bones (ischial tuberosity is the anatomical term), to the lower leg (specifically the posterior, or rear of the tibia). The main function of these muscles is to bend the knee, as well as extend the hip joint. These muscles are ubiquitously tight and shortened in societies that do not have a preponderance to sit on the floor, on stoops, and/or to do full squats in functional activities such as tending gardens and lands or simply going to the toilet into the good ‘ol Earth. Tightness is also ubiquitous for those who habitually sit in a slumped position or who keep their “tail and butt” tucked under.

If you have difficulty sitting on the floor with your legs straight in front of you, while having the front part of your sits bones making contact with the floor (try this out now to see what I mean), meaning, you sit, but you are not comfortable because your knees must maintain a bent position, and/or you get a sense of ‘falling’ back at the trunk, and/or it is fatiguing on the abdominal and hip flexor muscles to keep yourself upright, and/or you must support yourself with your hands behind you, in order to sit, then chances are your hamstrings are not as long, or as ‘lengthened’ as they could be. Or simply put – they are tight. It is also probable that your hip joints are often stiff, and that your pelvic-lower back junction isn’t as resilient and as moveable as you’d like it to be.

I’m speculating of course, but this is a common ‘thing’ in Western society and it can cause all sorts of problems for the proper functioning of our body movements.

I will admit that when I started this work, namely the work of Moshe Feldenkrais, I had NO CLUE about ANY of this STUFF. By “stuff” I mean the relationships between our muscles and skeleton and how all of this relates to our common everyday functions.

For example, as a result of my professional and academic training in exercise science and fitness, I saw the body more as a machine, rather than an organic resilient system (which it is!). I understood force vectors and the physics of human movement, but I didn’t understand function along with movement. I knew how the muscles and bones connected, and what nerve contracted what muscle, but I didn’t understand how the intention of action and how to pay attention to such, actually influenced our movement patterns (it does!). And, I never once considered how finding support from the environment for movement could make movement effortless.

But back to the hamstrings

I use to teach people how to stretch their hamstrings and witnessed very little change actually take place within their bodies.  I even tore a hamstring muscle myself trying to “stretch it out” one day at the gym almost a decade ago. This whole concept of “stretching out the muscle” is just to simplistic for our complex functional bodies.

I haven’t “stretched per se” in ten years. But I do “lengthen” often.

Here’s video from today’s class. I happened to have my camera with me and thought it would be nice to capture “ATM in action @ Alta”.

I’ll most likely hold an Intensive Hamstring Lengthening Retreat in the future. The men today thought it would be a good idea, and we all need it!

If you are interested, and have read this far, drop me an email and let me know. Irene.