Aging and Posture. Is it simply a function of FUNCTION? Here’s a great example that would say “Oh Yah!”

Aging and Posture. Is it simply a function of FUNCTION? Here’s a great example that would say “Oh Yah!”

Here are some striking before and after pictures of my hubby Seth.

Today he was putting together an iMovie slideshow from his “lost years” and I was absolutely flabbergasted when I saw this shot of him. This photo, just below, is from about nine years ago, while he was living on the Big Island of Hawaii. 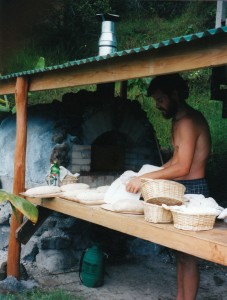 In addition to the wonderful artisan sourdough he is making, what else do you see?

In terms of his posture and the health of his spine, he looks as though he is much, MUCH older, than his then, 28 years of age.

Fast forward to this past Fall……

I took these photos of him while we were in New York City visiting my good friend/colleague Andrew Gibbons.  Seth had just finished a private Feldenkrais (aka, Functional Integration) session with Andrew. 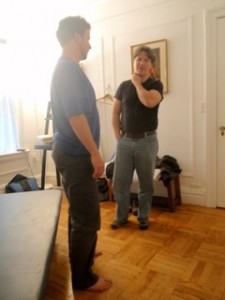 In their session, they were focusing on how Seth could find better skeletal support, in standing, and how force – as demonstrated by Andrew pushing through his breastbone – could be translated through his spine and down to the Earth…. 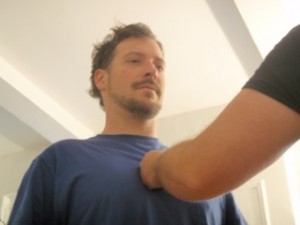 and also, how to find this force transmission through his spine from the lower parts of his body (see the photo below – his left foot is in contact with the table), all the way to the top of his head while on a low level Feldenkrais table…. 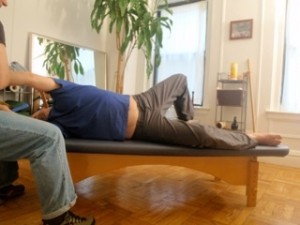 What you are seeing in these three photos are snap shots of a one-on-one Feldenkrais Functional Integration session and how we, as practitioners of this work, like to have our clients find, and learn, a variety of ways to experience a given function with lightness and muscular ease.

The health and youth of our body is too often tied with our age.

If Andrew had tried to put force through Seth’s chest and therefore spine when he was 28-years old, there is NO WAY there would have been clear force transmission.  It is also quite likely that Seth would have fallen back and not been able to withstand Andrew’s push, and he may have experienced a straining somewhere along his spine, most likely his lower back.

(I was there taking these pictures in the Fall, and even with Andrew’s strength and full force, Seth’s skeleton and posture was solid, not budging, and completely at ease!)

Let’s rewind to about one year ago…..

When Seth and I first met in the Fall of 2010, he was interested in learning how to better move and use his body so he would:

These shots of him working with Andrew are one year later from our initial meeting and they show how resilient his body is and how change CAN occur by simply learning how to better function and move, with awareness of course, in relationship to the surrounding environment.

No stretches and specific exercises necessary!

This reminds me of a favourite chapter title from one of Stewart Brand’s books:

You can’t say it any simpler than that.  Our day to day function definitely carves out and molds our body shapes.

Be sure to check out my potent posture audio lesson if you haven’t yet. It is a great way to start re-thinking this whole posture idea.