Lower Back Love. What exactly IS lower back love anyways? (& why the picture of the bull fighter?)

Lower Back Love. What exactly IS lower back love anyways? (& why the picture of the bull fighter?)

Click here to re-tweet What exactly IS lower back love anyways? (& why the picture of the bullfigher) 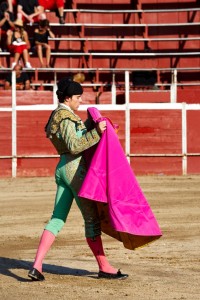 We are upright creatures and we move ourselves from point A to point B on tiny little bases called feet. This means that we have some advantages in comparison to other mammals and animals that are closer to the ground. For instance, we can see around us much more easier, sort of like giraffes, and we are able to turn quickly around ourselves, sort of like, the bull fighter. If the bull fighter didn’t have the swift and easy turning ability, as so many bull fighters do – he’d be bull food. His centre of mass is high up on his body, as compared to the bull whose centre of mass is low to the ground.

The bull is solid. The bull fighter is quick and speedy.

The con of our uprightness is that if our movement and function and muscles aren’t impeccably counter-balanced (think good distribution of work across the entire body) then parts of our body – such as our lower backs – start to work more than they should. Then couple this with the fact that we are meant to be upright (we must’ve evolved this way for some reason) and moving around like our hunter and gatherer friends did a few 10 thousand years ago, and not sitting for countless hours in chairs, leaves us with a bit of a dilemma:

They are sore because they aren’t used in the manner in which they were engineered.

Not a whole lot of hunting and gathering going on in our daily routine. Sure we might be “active” and run marathons and ride bicycles, but these are still all uni-directional movements; not much twisting, bending, reaching, turning, squatting, jumping, ducking, climbing going on – and what does this lead to:

A lower back that is cranky cause it’s not doing what it signed up for.

But it isn’t just about the lower back

The lower back area (also known as the lumbar spine) is a hot spot that plagues most individuals in its achy-ness and tightness – mainly because it is somewhere near that half-way point in human height. The other areas that tend to get hit with achy-ness are the knees, hips and neck/upper back area.

Why is it that rarely you hear of someone having ankle pain and stiffness?

Well, it is because ankles are so low down on the human frame and it’s very hard to move your centre of mass far enough away from your ankle joint so as to cause strain and stiffness….try it, it simply doesn’t happen. The lower back on the other hand is different. Ankle pains and problems are usually as a result of a direct injury – such as an ankle sprain – to the ankle itself, whereas lower back pains and problems are typically a result of faulty use of the body in its day to day routine.

What’s a human to do?

You see, we are never really taught good human movement – we are just expected to have it dialed in, and we did, when we were young. Playing and hunting and gathering in our make believe forts and play castles…..but then, we got big and got jobs and started going to gyms and walking on treadmills. We’ve really lost touch of our innate ability to use our entire spine in the 3-dimensional mode in which it was crafted.

We must simply start with how we stand so as to not put strain throughout our system.

How would a bull fighter stand? (check him out again in the picture above)

He certainly wouldn’t be caught bowing too far forward or too far back on his feet compromising his lower back, nor his safety!

Try this little audio piece that takes about 10 minutes.

It will guide you through some basics and it just might give your lower back some loving (and it may prepare you for any future bull fights!)