Do you know what ‘Pay Dirt’ means?

Do you know what ‘Pay Dirt’ means?

One of my students, Marva, who is in my 12-week nervous system rewire program, wrote a comment in our Facebook forum the other day, post-USA election results, and she gave me permission to share it! (Thank you, Marva!)

2 – It drove home, yet again, how utterly important this whole nervous system health and healing stuff is.

Here’s what she said: 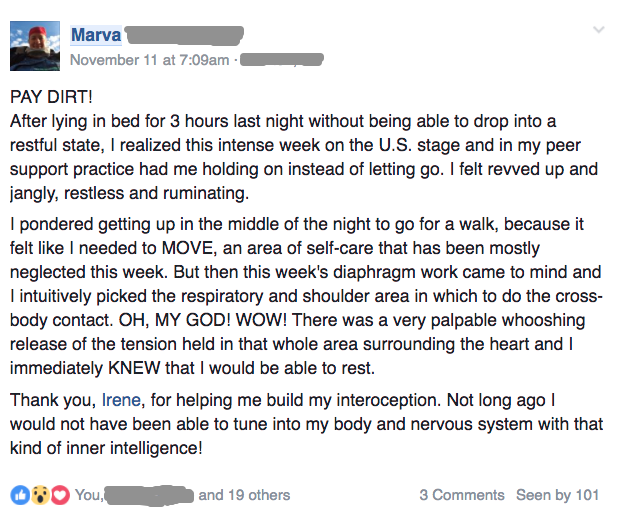 If you’re in the United States, and the last week has left you feeling a little uneasy, anxious, and maybe even worried for your future, then I’d love to shed a little bit of much needed light as to why being skilled in navigating your stress physiology and internal body sensations is key.

Because, if you’re feeling fear, anxiety, worried for your kids’ futures, your bank account, etc… whatever your specific poison may be that causes you to spiral downwards into a “what’s the point?” mentality, which will, if you’re not careful, create this exact reality — this is NOT the time to drive that worry deeper via some deep cleansing breaths, closing your eyes and pushing the outside and inside noise out.

Please trust me on this one.

It’s actually the time to feel all that nasty stuff that we’ve been (as a collective species) suppressing with the dosing up of pharmaceuticals, marijuana, alcohol, excess exercise, screen time that doesn’t serve a purpose, and yes, even those deep cleansing breaths.

In Marva’s case, she felt a need to move when she couldn’t sleep. This was her first clue – the first impulse she felt that something must be done the other night.

She, being in my current 12-week nervous system rewire program, was guided to try out one of the lessons she learned from last week that involves gentle self-touch to the areas of the upper lungs, chest and respiratory diaphragms (basically the entire upper trunk area).

She followed her impulse (something we learned in week 2 of the program), and rather than going for a walk, which could very well mask the internal chaos that wasn’t letting her sleep, she dove inside to her internal physiology – to her body. She put her intention and attention to the area of HER that was not permitting her to sleep.

You see, it wasn’t Trump per se that was standing in her room talking to her (pointing, shouting, etc.) and causing her to not sleep – it was her own physiological response to the results. The environment on the outside. The external.

But, we have the power to choose how we react, act.

The only control we have in situations like these is to go inside and see what the system needs so it can literally “release” the internal tension. The stress. The cortisol response.

“There was a very palpable whooshing release of the tension held in that whole area surrounding the heart and I immediately KNEW that I would be able to rest.”

This “whooshing” was that chaos and energy that was keeping her autonomic nervous system on alert, not able to sleep. (This is what keeps ALL people up who can’t sleep.)

She then mentions Interoception:

“Thank you, Irene, for helping me build my interoception. Not long ago I would not have been able to tune into my body and nervous system with that kind of inner intelligence!”

Interoception means being able to have perception of your internal physiology.

What your stress chemistry and physiology is actually doing.

This capacity to really FEEL our insides is being knocked out of us.

It happens for so many reasons – early trauma, abuse, adversity, chronic stress, society’s expectations to keep a happy face and push through the feelings, the pain, the grief and the anger.

We’ve been taught to not follow our impulses and not listen to our biology, and this slowly leaks out as mistrust in our own biology.

I believe this lack of interoception in first world countries is a big reason for all the pain and suffering going on right now in our world, the destruction and avoidance of so much.

(I also think it plays a part in why so many were shocked that Trump got the points he did. Those who weren’t shocked knew the state of the nation already. They knew that the toxicity was already there and this was a loudspeaker way to let everyone know how grave the entire situation is – and not just the political situation either – all of it.)

So, back to Marva, and this little share from the rewire program.

Our fear-based cycles are deeply enmeshed with our personal and collective traumas.

Until we heal the deep traumas (individually and globally) and learn how to listen to our biological impulses — becoming more skilled at perceiving our internal environs, and knowing how to facilitate our own forms of this “whooshing” and the sort of release of tension she experienced — we won’t break the cycles of fear, violence and bigotry that is obviously still widespread, alive and well.

What does this mean?

It’s an old saying that was used when something was mined profitably. Something from the earth and its soil. It also represents any source of success or fortune. A discovery or something that brings a good return. And it doesn’t have to be monetary.

Marva found the “profit” in having a keen eye on her internal physiological systems – how her body was responding to the real-time stress of current events.

She followed her impulse to do what her body needed.

She put into practice her newly learned practical skills (I call them neurosensory exercises) rather than doing her typical routine and in doing this, she didn’t override the feelings and sensations of overwhelm.

Instead she rode them like a tsunami wave until they ended organically.

Many people get into somatic healing work (for me, I practice and blend the work of Somatic Experiencing and Feldenkraisian learning) because they’ve tried so much, and they are still not well.

Many are confused and even angry because they’ve spent thousands of hours (and dollars) doing mind-body everything and would consider themselves healing junkies with lots of tools and skills to slay uncomfortable feelings and sensations.

But it could be that these tools have only served to sedate the dragons and gremlins.

If you’ve been feeling uneasy and scared this past week, are afraid for your future and the future of your kids and unborn kids/grandkids, then consider that while the work you’ve been doing has given you good stuff to lean on in times of stress, it may not be sufficient for those times when there is no way of controlling the outcomes — because right now we can’t and it’s scaring the shit out of a lot of people.

All that we can do, I believe, is get more skilled in nervous system health and build this capacity and resourcefulness that Marva is building right now because we actually don’t know what the future holds.

The cover up can’t be hidden anymore – not in our political space, our healthcare space, our food industry space, or in the space of our own body system.

What I do know is this: when we can grow resilient strength that can bend and go with ALL uncertainty, then we’ll have real power because we won’t back down and shut down in times of intense stress.

We’ll engage with curiosity, empathy and care for our body, and all the other 7 billion bodies that are our family here on planet earth.

This to me is the epitome of striking gold.